Look what I had been doing over the weekend! I didn't want to be left alone so I joined the fun.  I made these rag purses that are so popular among Stampin' Up! demos.   These rag purses used the stampin' Up! scallop square die.

I don't sew but I do own a decent sewing machine.  I bought it seven years ago trying to sew curtains  panels for our new home.  I remembered I couldn't even sew a straight line so I ended up crochet the edge of the panels, there were more than 10 of them.  And the sewing machine had been sitting in the basement collecting dust for all these years until this past weekend.

I don't know anything about fabric, so I was in and out of Joann Fabric 4 times last week.  I know outragouse, isn't it?  This is my second rag purse.  Second!  The first one was no longer a purse. You won't believe what fabric I had used for my first purse! No sew fleece.  I was looking for fabric that required minimum sewing and thought the no sew fleece is perfcet except it too soft.  So after I was done with the purse, the purse won't stand and the handle stretched.

So I went back to Joann Fabric and got these from the clearnce rack.  I didn't really like it. 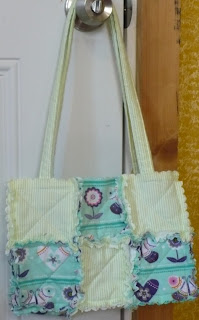 I went back again and got this.  I don't know if it's the colors or the patterns but I like it better than the second one.  I didn't have fancy button so I made two roses for the purse,  one rose for the front 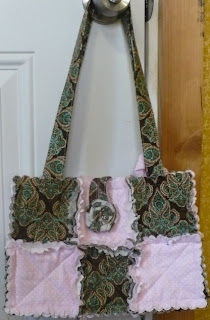 and another one for the back or the side. 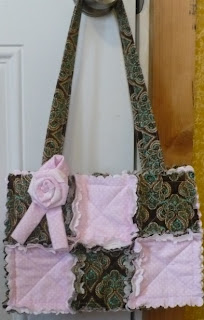 These rag purses can be so addicted so you are going to see a few more.
Thank you for stopping by.  Have a great day!
Helen
Posted by Helen at 9:21 AM

They're pretty and you did a great job!

Helen! You are crackin me up about that sewing machine. When you told me you got it out of the basement, I never in my wildest dreams thought you couldn't sew!! ;D The purses are both cute, I like the fabric of the second one best. My sister wants to know if your sewing machine is looking for a good home..., but I predict you will be using it much more now! ; )