I mentioned last week that I made a 4 tiers cake for a rehearsal dinner.  I forgot to take the pictures before I gave them to Lynn.  However, Lynn took the pictures and sent them to me but I accidentally deleted the pictures.  I told Lynn about it and she kindly sent me again.  It was from her iphone so the pictures are different from my usual ones.

The bottom layer had 17 boxes, next were 13 boxes,  the third layer had 12 boxes and the top layer had 11 boxes.  I made 61 boxes total but not all of them were assembled on the cake. 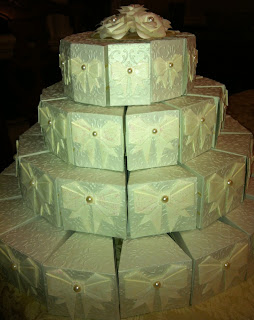 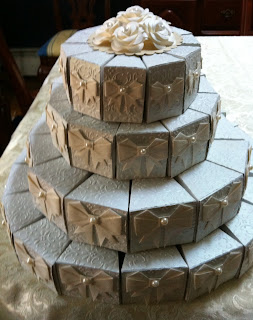 Again, I made each cake piece looking like this. 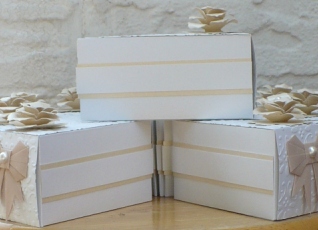 I started this cake boxes back in February because there were so many pieces I had to make.   It took me over 1 hour just  to cut the flowers for the roses. Then I had to make 61 origami bows in 3 different sides. After that  I had to stickle the bows  and added pearl to the bow, cut and emboss the outside of the cake boxes and I had to make 51 tags to go in the box.  You got the idea of how much work it was but I love every minute of it and I would do it all over again without hesitation.  I saw Lynn again after the rehearsal dinner and she told me that everyone love the cake!  That was a music to my ears. :)

I am entering this to:

As the weather getting nicer and warmer now, I had so many things to do around the house that I had to reduce my blogging time to twice a week.  I will be posting on Monday and Thursday from now on.

Thank you so much for checking in on me again.

WOW! This is amazing! Thank you so much for joining us at Make it Monday! Don't forget to leave a comment for another entry and mention you saw them on MIM for a chance to win our second prize! Good luck,
Rene :D

STUNNING, dear Helen... how much patience you have...

Great!
I loved it!

Hello Helen. I saw this Beautiful cake on MIM..Loz

Of the all the links at MIM, yours certainly caught my eye! Gorgeous, Helen. Tastefully done. Am very tempted to do this for a close friend's upcoming nuptials. Thank you so much for sharing.

wow gorgeous, you can see you put a lot of work into it, and a lot of patience!!
Paula

I have always loved your cake boxes Helen and these are as elegant as ever .

Oh i am simply speechless !!! this is so gorgeous and all that effort you have put into making this is so amazing...this is so so beautiful!!

Thanks for joining our No Stamping challenge at 4 Crafty Chicks, awesome job!

Gorgeous, do they use the little boxes to hand out wedding cake?

So much work has gone into creating this. Gorgeous.

Thanks for playing in our No Stamping challenge this week.

This is absolutely GORGEOUS! Oh my word, so much work, but SO totally worth it!!! Fantastic!!! :)

WOW, and double WOW. That is amazing.

Helen, your cake is absolutely gorgeous!!! I am so glad you were able to post. You will be happy to know that your beautiful croceted flowers will be the "stars" on my Mother's Day cards this year. I couldn't have found a lovier focal point! I can't wait to post them! :)

I've always admired cakes like this, but haven't had an occasion to make one yet! Yours turned out absolutely beautiful!! It looks like it was a LOT of work, but well worth it in the end!

Such a Beautiful cake. I saw this on Make-it-Monday. Faye

What an awesome feat! you have a very lucky friend :) saw this at MIM.

Shut Up!!!! I am picking my mouth up off the floor. That looks better than a real cake and there's nothing on earth I like better than a slice of cake.
Great work of love.

Wow,this is amazing! You don't do things by halves do you!

Thank you for sharing with us at Make it Monday this week.

Absolutely stunning, Helen! This is a masterpiece! Thanks for playing with The Paper Players!

Wow, Helen! This is absolutely gorgeous! Thanks so much for joining us this week at The Paper Players! :)